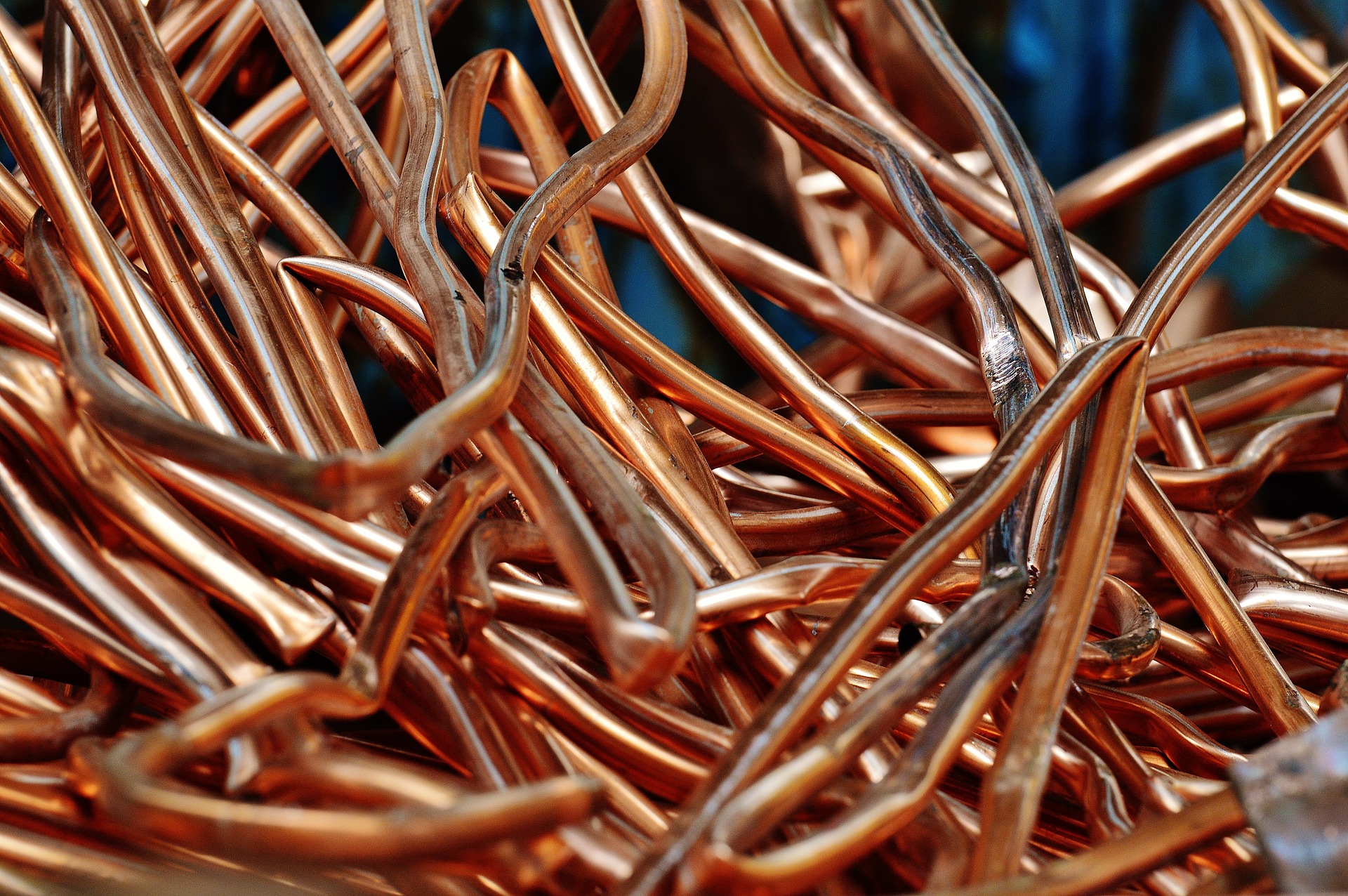 Across the 12 countries that participated in the one-day effort, law enforcement officials ran checks on nearly 54,900 individuals, more than 42,200 vehicles, almost 8,000 environmental companies and scrap dealers, 589 border areas and 2,572 other hotspots, including harbours and rail transport sites.

The crackdown resulted in the arrest of 117 suspects alleged to have committed serious crimes, who were detained alongside more than 1,300 individuals who were convicted of minor offences and released.

In a statement, Europol said: “This action sends a strong signal from law enforcement authorities to metal theft gangs operating all over Europe and to the many scrapyards that accept all kinds of metal with ‘no questions asked’.

“The phenomenon of copper theft has taken a European dimension and it often affects companies operating in the transport, energy, and telecommunications sectors, disrupting essential public services and leading to significant economic and social repercussions and possible implications for security.”

The operation, during which investigators carried out real-time cross-checks against Europol databases, was conducted within the framework of EMPACT, an ad hoc management environment to develop activities in order to achieve pre-set goals in Europol’s fight against serious international and organised crime.

In May 2016, Europol revealed that police in Romania and France had taken part in an operation that resulted in the disruption of a major Romanian metal theft gang operating in France.

The effort involved 10 simultaneous raids across the country in the provinces of Ilfov, Teleorman and Galati.

Three suspects were arrested and a large quantity of evidence was seized during the raids, including 300kgs of iron alloy, cash and documents.

Earlier this month, China border force agents arrested 245 people on suspicion of being members of a scrap steel smuggling ring who were said to have illegally sold more than 2.4 million tones of metal to buyers across Southeast Asia.

How paedophiles, sex traffickers and blackmailers freely use the surface web to exploit victims

Spanish police have arrested 30 suspected members of a sham marriage network that facilitated illegal immigration by setting up partnerships of convenience.

In an operation backed by Europol, investigators from Spain’s Policía Nacional carried out 11 raids on multiple residential and business premises, seizing more than €10,000 ($11,093) in cash along with evidence that indicted those detained were involved in the facilitation of illegal immigration and document fraud.

Members of the network are said to have set up sham marriages between male illegal immigrants and Spanish women, allowing the men to formalise their stay in the European Union.

Migrants seeking to avail themselves of the gang’s services would be charged as much as €12,000, with their bogus partners being paid €3,000 for agreeing to enter into fake marriages.

Members of the gang, which was made up of members of both Moroccan and Spanish origin, used a complex web of shell companies to facilitate the conspiracy, and had also set up a sophisticated money laundering operation, through which their profits were funnelled.

The network was based in the Valencia town of Sagunto, but also had bases in Morocco, Belgium, France and Italy, a fact that triggered the involvement of Europol.

In a statement, the EU law enforcement agency said: “Europol provided coordination and analytical support and facilitated the information exchange.

The investigation that led to the dismantling of the network was launched after Spanish police were alerted to potential irregularities in residence permit applications in Sagunto.

The two alleged leaders of network, a Spaniard and a Frenchman both of Moroccan origin, owned several companies in Sagunto, through which the Spanish women to whom migrants were married were employed.

Migrants who used the network’s services would either remain in Spain or be transported by the gang to France or Belgium.

In January of last year, police in Belgium and Portugal broke up an organised criminal gang that paid mostly Portuguese women to enter into sham marriages with Pakistani men.

Investigators arrested 17 suspects in Belgium and a further three in Portugal in a series of coordinated raids in an operation that targeted a network that was said to have paid women thousands of euros to marry the illegal immigrants.

Back in August 2018, law enforcement agencies in Romania and Poland held five members of an organised crime gang suspected of being behind the arrangement of sham marriages for Indian and Nepali nationals looking to gain access to the EU.

Researchers at Purdue University have created a small edible tag that can be embedded into medicines in order to prevent the counterfeiting of drugs.

In a paper published in the journal Nature Communications, scientists from the institution explain that drug counterfeiters would need to decipher complicated patterns not fully visible to the naked eye to get round the new security system.

The edible tags serve as digital fingerprints for individual pills and capsules, and are intended to help pharmacists verify the legitimacy of their stock before dispensing it to patients as well as being a method to discourage the counterfeiting of medicines.

According to the researchers, their invention uses an authentication technique called physical unclonable functions (PUF) that generate a different response each time they are stimulated, meaning that even drug manufacturers would not be able to recreate tags.

Taking the form of a transparent film made of silk and fluorescent proteins, the tags are easily digestible, meaning they can be consumed by patients when they take their mediation.

Commenting on the new technology, Jung Woo Leem, a postdoctoral associate in biomedical engineering at Purdue, said in a statement: “Our concept is to use a smartphone to shine an LED light on the tag and take a picture of it. The app then identifies if the medicine is genuine or fake.”

The tags currently last for at least two months before the proteins start to degrade, but Leem and his team are working on extending their life so as they can last until the expiry date of the drugs they are intended to protect.

As well as holding a security key that can verify the authenticity of medication, the tags could also hold other information, such as dosage instructions.

Leem has made two patent applications to protect the tags through the Purdue Research Foundation Office of Technology Commercialisation.

According to a report published by the World Health Organisation (WHO) in November 2017, 10% of all pharmaceutical products circulating in low and middle-income countries at that time were either fake or of substandard quality.

The WHO said the trade in illicit pharmaceuticals is controlled by major organised crime networks who often channel their profits into other forms of illicit activity.

In March of last year, Europol revealed that a crackdown it had led on the sale of illicit pharmaceuticals across 16 countries in 2018 resulted in the seizure of some 13 million doses of counterfeit or smuggled medicines.

UK animal protection charity Dogs Trust has revealed that thousands of Britons may have been conned into buying puppies smuggled into the country illegally by organised criminal gangs in a practice it has dubbed “dogfishing”.

In a survey of 2,000 owners of puppies designed to establish how many may have purchased their pet from gangs that smuggled young dogs into the UK from countries in eastern Europe, the charity spoke with many animal lovers who described puppy dealers offering discounts for quick sales and lying about the age and breed of dogs.

The poll found that more than half (51%) of puppy buyers were not allowed to see the animal they were purchasing more than once, while 43% were not offered the chance to visit the puppy with its mother, which Dogs Trust described as two signs all might not be well.

One woman told Dogs Trust how she was left heartbroken after purchasing a puppy that she saw advertised online on Christmas Eve, only to have to rush it to a vet for emergency treatment on Christmas Day because it had contracted parvo virus, a highly contagious and potentially fatal condition that causes lethargy, vomiting and diarrhoea.

The puppy had to be put down.

Launching a new campaign named Don’t Be Dogfished, Dogs Trust Veterinary Director said: “People think they are getting a healthy, happy puppy but behind the curtain lurks the dark depths of the puppy smuggling trade.

“Many of these poor puppies suffer significant health conditions or lifelong behavioural challenges, and sadly some don’t survive, leaving their buyers helpless and heartbroken – as well as out of pocket.

“This is why we are touring the country in a van like those used by puppy smugglers to educate the public on the shocking realities of the puppy smuggling trade and advising them how they can take action to avoid being ‘dogfished’.

“If it seems too good to be true, as hard as it is, walk away and report it.”

Many organised crime gangs across Europe have moved into puppy smuggling owing to the huge profit it returns for relatively little risk.

Shares
We use cookies to ensure that we give you the best experience on our website. If you continue to use this site we will assume that you are happy with it.Ok